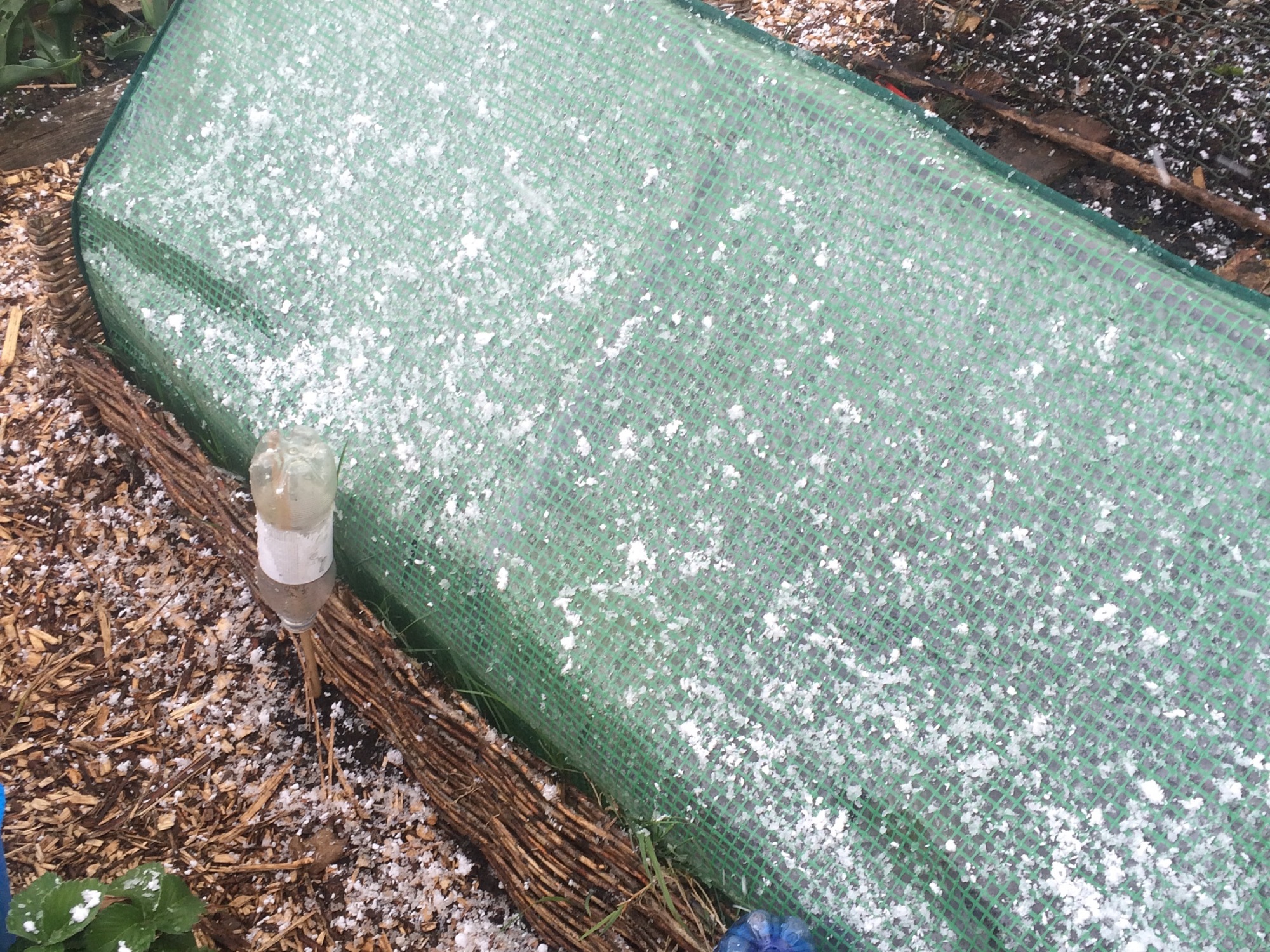 It’s snowing in London, and what’s more, it might even stick! I know this will be a common occurrence in more northern/rural areas of the UK, but it is a rare thing indeed for us in the capital, as winters can come and go without so much as a light dusting. On the allotment, freezing temperatures can be a good thing as much as bad, because they can kill off diseases and suppress slug populations, as well as boosting overwintering garlic. If you take a few steps you can get through a Siberian freeze and see off the Beast from the East with everything in tact.

I’ve got broad beans, garlic and purple sprouting broccoli growing at Plot 35a. The PSB has been in the ground since last summer and is really winter hardy, while the broad beans and garlic went in in October. Because they’ve been there through the winter, they will be acclimatised to the cold by now. We’ve had some below freezing temperatures already and they’ve been ok. The broad beans are about 10cm high, and should be tough enough to withstand even heavy snowfall. They will slump a bit but bounce back once it thaws – broad beans are incredibly resilient. Leave the snow to thaw gradually, because removing it straight away from plants while it’s still freezing will make the leaves very wet, which will then refreeze, and cause more damage. Garlic actually needs long periods of cold through winter for the bulbs to swell, so let it embrace the snow.

Wintry conditions wouldn’t normally pose a problem for fruit trees in December and January – and cold temperatures kill off diseases on fruit trees in winter, which is a good thing. But now we’re heading into March, with flower buds emerging, it can spell disaster. I am particularly worried about my peach, apricot and nectarine trees which are more vulnerable than apples and pears. Tiny pink buds started to appear on these trees in the middle of February. Below-zero temperatures can destroy peach and apricot blossom in spring. But even though the buds are still tightly closed, they can still get hit by the frost.

My nectarine ‘Lord Napier’ tree, which I planted three years ago and has not yet produced fruit, is espaliered against the back of my daughter’s playhouse and in a really sunny spot, but still exposed. Last week I covered the branches with fleece, and hopefully this will be enough. However I have two peaches and an apricot tree that are espaliered at the edge of my plot and are not against a wall or shed – they have survived four years, but it hasn’t got down to -5C, the predicted low this week. They’re too high to cover with fleece so I’m just going to cross my fingers. The flower buds on the apple and pear trees are still at an early stage, so they should be ok.

This winter I have ordered my first rose to go on the allotment – I love intermingling flowers with fruit and veg. I bought a shrub rose called Sweet Juliet from David Austin – it is an apricot-coloured tea rose with the most amazing scent, and it reminds me of my mother, who has one in her garden. Like roses, fruit trees bought in winter arrive as bare root – meaning they’re essentially dormant until spring. If like me you’ve ordered a bare root bush or tree of any variety of fruit or flower, and are worried about planting it in the snow or cold, don’t worry. If the ground is frozen or covered in snow, put the tree in a bucket of water – in a shed or somewhere where the water won’t freeze – with the roots kept wet until it’s ready to plant. Never allow the roots of a bare root tree to dry out.

If it’s cold and snow is coming, but the ground isn’t yet frozen, you can heel it in – basically putting it in the ground in a sunny spot, covering with compost and keeping it moist until it’s ready to plant properly. Dig a hole slightly deeper than the roots, place the tree at a roughly 45 degree angle, and cover with compost. Draw the compost up around the stems to protect them from frost. Make sure the compost around the roots is compact so there are no pockets of air which can fill with water if it rains, and then freeze and damage the tree. Make sure you replant, upright and with lots of rotted manure, in its final spot before bud burst around the middle of March.

If like me you’ve been eager to start the new season by sowing seeds under cover, then you need to make sure they’re not going to be hit by the extreme cold. A couple of weeks ago I sowed some lettuce seeds in modules and put them in my plastic greenhouse. It gets very warm in the day but pretty cold at night. The shoots haven’t broken through the soil yet, but I will keep checking them – if I can make it down there in the snow – to make sure they’re not exposed to too much cold. Lettuce, pea, broad bean and cabbage seedlings should be ok if they stay undercover. Tomatoes and chillies are too tender to be anywhere near the plot right now, even without the snow – they should be indoors in a propagator or on a warm windowsill. I also have some sweet pea seedlings in root-trainers that I sowed back in October. They’ve been in a little wooden greenhouse since then, and have acclimatised to the cold, and should be ok, but it might be worth adding some fleece or polythene to the sides of the greenhouse to keep them warmer.

You’re unlikely to have planted seed potatoes in the ground yet, but, like me, you might have some chitting, that is, sitting in trays growing short shoots to get ready for planting in mid to late March. Maybe you have room at home to chit your potatoes, in which case, it’s all good. But mine are in the same wooden greenhouse with the sweet peas. As long as they stay dry, the potatoes will be fine, but the short purplish shoots could be hit by frost. Again, it’s a good idea to get the fleece out for some extra protection.