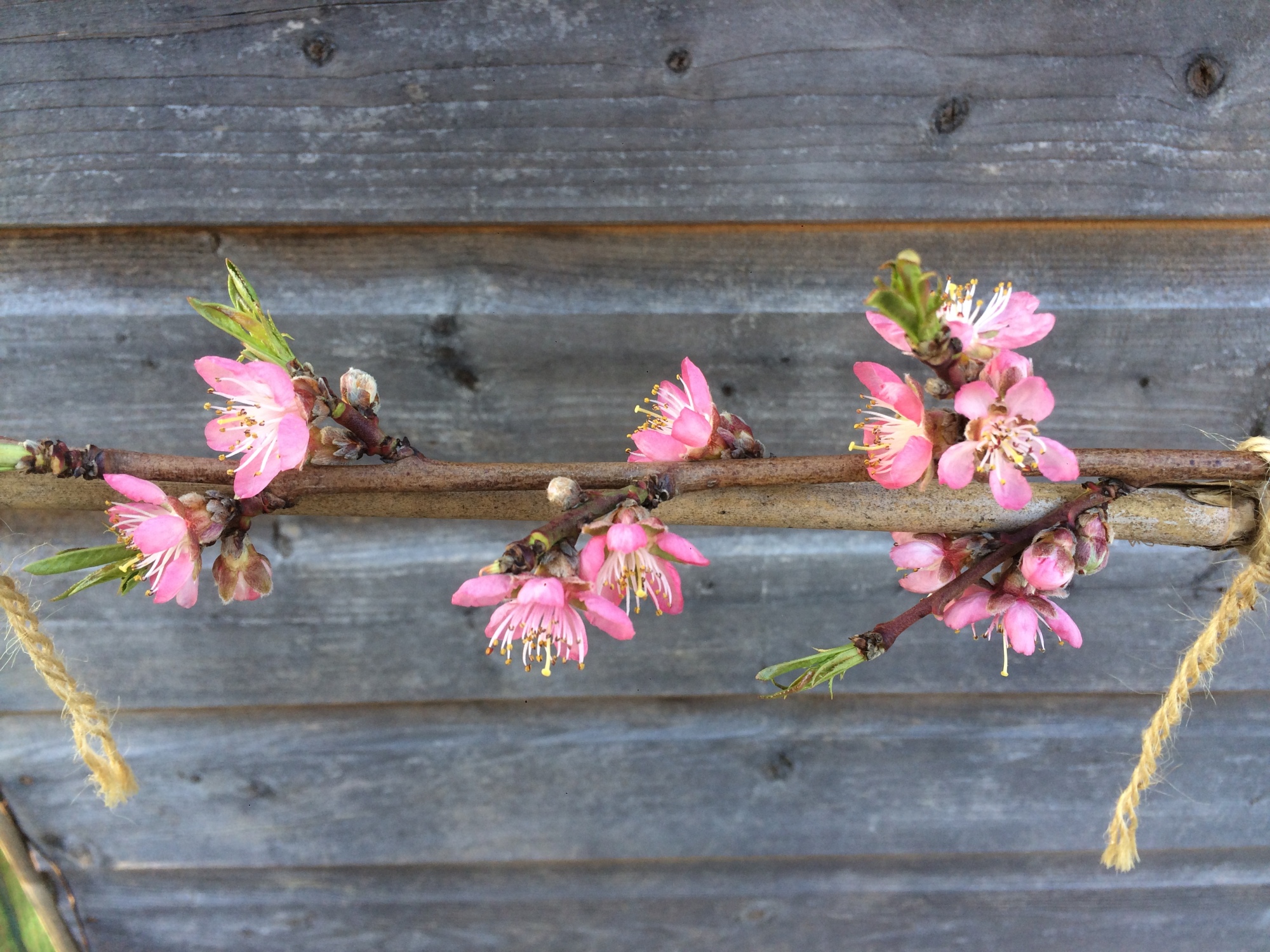 The photo at the top of this post was taken a year ago this week: it is the beautiful pink blossom and infant green leaves of my nectarine. As I write, the same nectarine tree is underneath a fleece blanket to protect it from the snow we had this weekend. Even with this protection, the buds are stubbornly refusing to come out while it is still so cold. I know how they feel: last week we had a couple of warmish days – there were a couple of afternoons when the temperature nudged double figures – but this weekend it was back to snow and ice.

If, like me, you have ordered summer bulbs, rhizomes and tubers to brighten up your garden or plot later in the season they might be arriving in the post right now. I’m planning to intersperse my vegetable beds with bright flashes of dahlias, cannas, lilies, irises and agapanthuses – some in pots, others at the edges of the plot underneath the espaliered apples and peaches. My order arrived at the end of last week, and if we were having a normal spring, this would have been a good time to get them planted in the ground. But we are not, of course, having a normal spring.

Instead, if you have newly bought summer bulbs you need to plant them in pots and keep them under cover until the risk of frost has passed – even in London where I am. Do this rather than keep them in their boxes, because they will need to start getting into growth as spring arrives. Dahlias and cannas in particular are tender and will be damaged if planted out in this weather.

Lilies are planted deep in the soil – as much as 15cm below the surface – but for the next few days they should be kept under cover, again planted in pots. Irises are planted with their rhizomes partially exposed, and although they are hardy it would be a risk to plant them straight into frozen soil now.

Plant the bulbs, tubers or rhizomes in pots – depth depends on what plant it is, but apart from the irises they should be at least double the depth of the bulb – in pots of compost mixed with garden soil. Don’t forget to label them, water the soil well and place them in a frost-free greenhouse or shed. I will plant out the irises in the next couple of weeks, once the temperatures are consistently milder. The lilies will stay in their pots for the season, but I’ll move them out of the greenhouse in mid-April. The dahlias and cannas will be planted out into their final growing spot in mid to late April, once the risk of frost has passed.

I ordered my summer bulbs from livingcolourbulbs.com. The dahlias are ‘HS Flame’, which has dark purple foliage and salmon-coloured single flowers (the HS stands for “Happy Single”) and will be eventually planted out near a line of apple espaliers on the side of the allotment. I bought three rhizomes of a canna called ‘Durban’, which has striking orange blooms and striped leaves. These will go next to the strawberry bed in a hot and sunny part of the plot.

The lilies are ‘Cogoleto’, with rose pink flowers, and ‘Royal Kiss’, with wine-coloured blooms. These will go in large pots, five to a pot, near to the quince tree at the entrance to plot 35a. I will plant Iris Sibirica ‘Lemon Veil’, with pale yellow and lavender flowers, and the deep purple Iris Louisiana ‘Black Gamecock’ in the moist ground around the pond.

That pond was brimming with frogspawn last week, a very cheerful sign of spring. But when I went there this weekend the pond had frozen over, and I fear the not-quite-tadpoles are not going to make it. It could be that, like us, the frog that laid them will have to start all over again when it gets milder this week.

One thought on “Spring forward”