Several times a year we visit North Yorkshire, where Him Indoors comes from. Not far from the family home is Ampleforth, an abbey and one of the country’s leading Catholic schools. In a happy case of nominative determinism, Ampleforth is also home to one of the most diverse and productive orchards in the north of England. The monks make and sell their own cider, an enterprise that might be surprising in the context of a humble-living religious order that is unchanged in a fast world, but monasteries around the globe are outlets for booze (my first encounter with a monastery-related drink was the bright green Chartreuse liqueur that is made by monks at Grande Chartreuse, near Grenoble in the French Alps, and although I didn’t try it – I was 10 – I liked this literal interpretation of the Holy Spirit).

The orchards at Ampleforth have been in production for decades – the first trees were planted by the Benedictine monks in 1802 – but in recent years they have been channelled into a business, selling cider, apple juice and beer. The orchard business makes £125,000 a year and they have just started exporting beer to France. Whether or not you believe in God, there is something extraordinarily spiritual about growing an apple tree, because it tells a story through its variety. It signifies history, permanence, and, in its harvest, life.

In this sense, growing an apple tree, or an entire orchard, should be something that everyone should do – even the smallest plot can accommodate a stepover or cordon, or even a dwarf variety grown in a pot. The decline in the cultivation of heritage and rare apple trees over the last century is a tragedy for our country, and we should all do our bit to reverse this, including growing heritage or rare varieties. 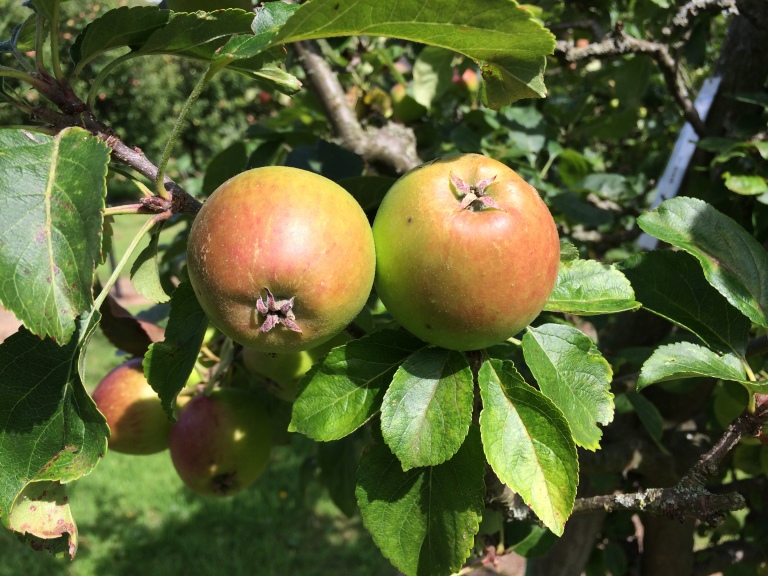 When I took over Plot 35a in 2013 it was April, too late to plant bare-root trees, which must go in the ground after leaf fall in the autumn and before new leaf in the spring – so before the end of February is safe. I had to wait until the following winter, two years ago this month, to plant apple trees. Because I have a city plot half the size of a standard allotment, my apples are grown as stepovers or espaliers at the edges of beds to make room for the vegetables. So far my harvests have been small, but within three years I should be picking plenty.

Pot-grown fruit trees can be planted at any time of year, but they are much more expensive than bare root, so it isn’t really worth it unless you’re desperate for a bit of immediate structure.

When buying a cultivated variety, or cultivar, you will need to know what rootstock you should grow – this matters more for specimen/free-standing trees, because if you grow a tree with a vigorous rootstock, it will reach 20ft high, while buying a tree with a dwarfing rootstock will keep it small, obviously. Rootstock matters less if you are training your tree into an espalier, as I am, because your secateurs will keep the growth in check.

The two other key things with apples are the pollination and the pruning regimes. Apples fall into different pollination groups, according to the time of year they are in flower. They need to be cross-pollinated with other apple trees in flower at the same time, or if flowering overlaps – so those in the same pollination group or in the neighbouring groups. For example, an apple in group 2 can be pollinated by varieties in groups 1, 2 and 3. An apple in group 6 can be pollinated by groups 5, 6 and 7. There are some varieties that cannot pollinate with each other, and some that have sterile pollen -known as triploid – which need to be pollinated by two varieties nearby. There are also varieties that are self-fertile, so do not strictly need a partner, but even these varieties will produce larger yields if they have other trees nearby. The best thing to do is research the varieties you want to buy, or have inherited on a plot, and check if they are compatible with others.

If this all sounds too onerous, don’t be put off planting an apple tree because on a busy allotment site there will be so many different varieties that the growing season is a long carnival for the bees, so pollination groups don’t matter as much.

Pruning is a more exacting process. Apples can bear their fruit on short spurs along branches, at the tips of branches, or a combination of the two. Prune the branches of a tip-bearer too vigorously and there will be no fruit for the coming season. Conversely, spur-bearing apples need to have branches cut back in winter to create more fruit buds, or else the tree’s energy will go into sappy new growth without flowers. Most varieties are spur-bearing.

If you are growing a free-standing, or standard tree, follow this routine in winter: first tackle dead, diseased and crossing branches or those that are growing towards the centre, which will help keep an open shape. Next, prune branches that grew in the previous season back by a third, just above an outward-facing bud, to encourage more growth and flowering and to ensure new branches grow outwards. Leave some, but not all, new growth that does not have buds for the coming season.

Cordons are traditionally grown at a 45 degree angle and are restricted to a single main stem – for this reason only spur-bearing apple varieties are suitable. Stepovers and espaliers begin as maidens – young trees that are left to grow side shoots in year one, and then trained into shape for year two. This is the method I am following at Plot 35a. The pruning regime for spur-bearing espaliers is the same as free-standing trees, tackling the dead, diseased or crossing, and then pruning previous season’s growth back by a third. The main difference is removing all the extraneous growth that doesn’t fit the shape of the espalier.

After pruning out dead, diseased or crossing branches, cut back some growth by a third, but don’t set to all branches – because you need to leave some buds at the tips to develop into apples.

If you are growing a stepover or espalier, follow the same rules about dead or crossing branches, and any that do not fit the shape. But don’t prune all of the laterals on your main structure because you will be left with no apples. As I said, tip-bearers do not suit growing as a cordon.

In 2014 I planted the following varieties, all grown as stepovers or espaliers (details of pollination groups and pruning types are from the RHS):

‘Bountiful’ – a cooking apple which holds firm when cooked, so it will be good for apple charlotte or a tarte aux pommes. As the name suggests, it is a heavy cropper – although my tree fruited for the first time last year, and only bore two apples, so I am yet to reap the benefits. Pollination Group: 3. Harvest: mid-season (September). Pruning: spur-bearer. 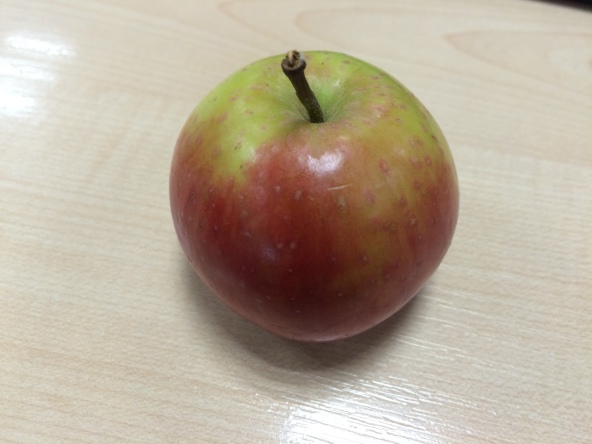 This winter I have planted five new trees, which will also be grown as espaliers or stepovers:

‘Peasgood Nonsuch’ – one of the older varieties with a wonderful name, named after a Mrs Peasgood (the ‘Nonsuch’ means there is nothing to rival it) who grew the apple when she was a child in Grantham, Lincs in the 1850s. It is a cooking apple which purees well. Pollination Group: 3. Harvest: mid-season (September). Pruning: spur-bearer.

‘Cox’s Orange Pippin’ – one of the most famous varieties, introduced in 1830. Can be used for eating and cooking. During cooking it does not puree well, but holds its shape, and does not need much added sugar as it is already naturally sweet. Pollination Group: 3. Harvest: mid-season (late September). Pruning: spur-bearer.

‘Egremont Russet’ – I am growing this apple on recommendation from my Dad, who brought some of these down to London over Christmas. They are classic russets: bronze-skinned with a sharp flavour and they keep well. Pollination Group: 2. Harvest: late-season (October). Pruning: spur-bearer.

I would also recommend growing a Bramley, or Bramley’s Seedling, the classic cooking variety – it is a triploid so needs two or more partners, and a partial tip-bearer, so best grown as a standard tree. I am not growing one on my plot because, back in North Yorkshire, there is a gigantic Bramley tree that produced more apples than we can harvest, and every year we make apple chutney – I will post a recipe at harvest time.

The following websites are very useful for pruning advice, identification and pollination: