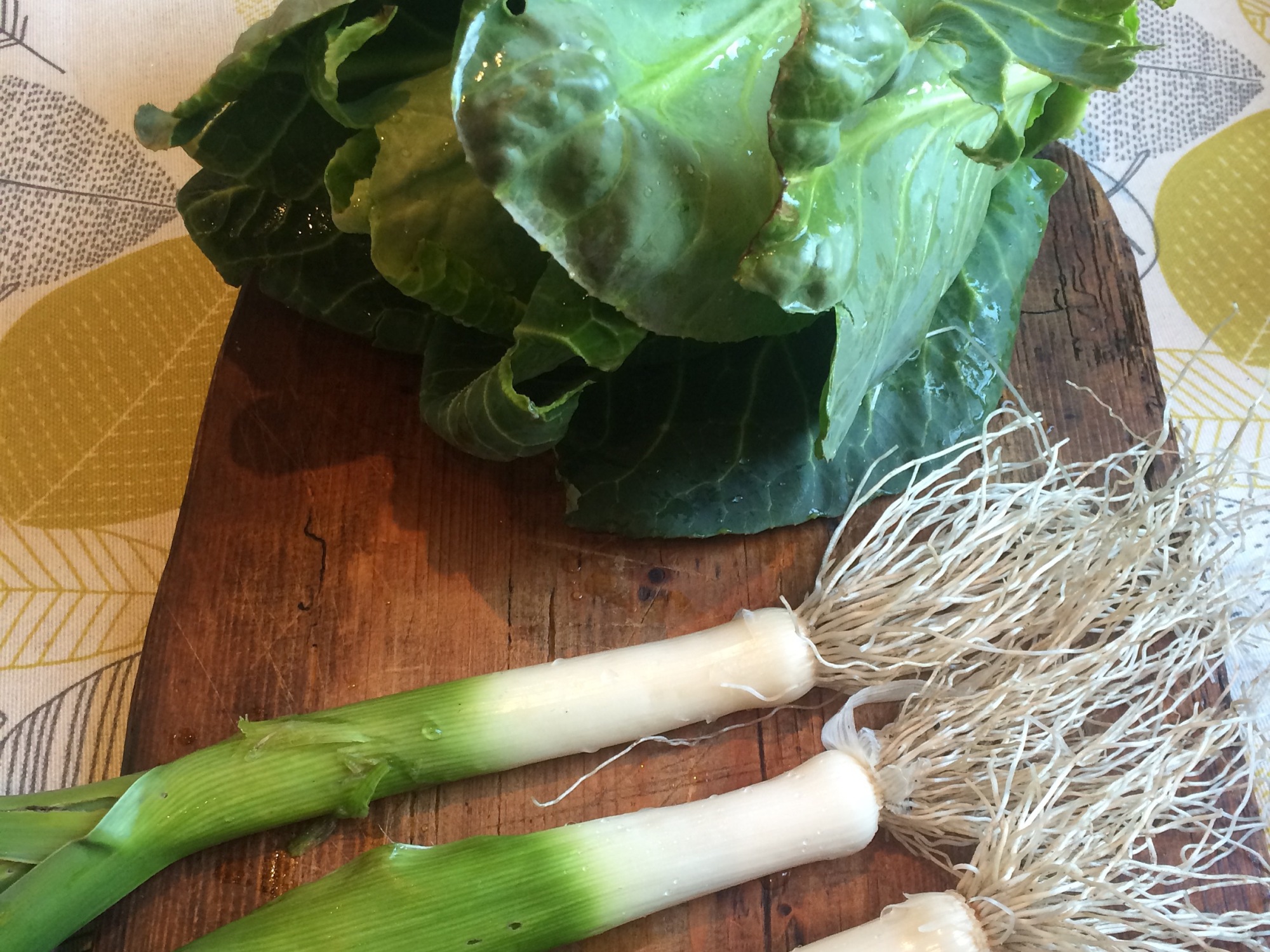 Unless you are trying to be entirely self-sufficient, the concept of the “hungry gap” doesn’t mean much in the low-harvest months of March and April. Last week I bought a huge box of red, orange, pink and yellow heritage tomatoes, grown in Spain, without feeling too guilty. I don’t want to deny myself or my family delicious veg just because it’s early spring and I haven’t grown it on Plot 35a. That said, there are still things growing on my plot – the purple sprouting broccoli  will be ready in the next two weeks, this week I have had the first of the spring cabbages and yesterday, in warm sunshine, I picked the first rhubarb of the season.

I am also harvesting the last few leeks that have been growing for a year. As they are one of the few veg that fills the hungry gap, and it is now time to sow leek seeds for next winter, they are my Star of the Week.

Start leeks off in root-trainers in March and April – any later and they won’t grow to full size. The root-trainers give them plenty of room to stretch, and make it easy to plant to their final position in May and June. The varieties I am sowing this year are:

‘Elefant’ – large, sturdy and good at standing through winter.

‘Musselburgh’ – one of the largest and most famous varieties, also is said to have good disease resistance.

‘Lyon 2 Prizetaker’ – early, thick white stems, although I am not sure my leeks would have won prizes this year.

The seeds don’t need the warmth of a heated propagator – just a cosy corner of a cold frame, if it’s March, or a sheltered spot outside in April. Keep them well watered and, once they are the thickness of a pencil – similar to the size in the picture below – prepare to plant them out.

Rake the soil where you are to plant the leeks and then firm it down – this makes it easier to make holes that stay intact after watering. Using a dibber or the handle of a hoe, make holes about 5-6 inches deep, and 12 inches apart. Carefully drop one skinny leek into each hole (if you want faster, baby leeks then you can put three in each hole and harvest them in 2-3 months).

Water each hole well, but don’t backfill with soil – although some tiny landslides are inevitable. Keep up watering and feeding with fertiliser. As the leeks grow, they will fill the hole. To get more of the leek to go white, wrap a cardboard collar around each one to blanch it.

When I picked some leeks last week I noticed some signs of rust – a common complaint for this vegetable, but thankfully the impact on my crop has been minimal. Rust can be very troublesome, however, and can wipe out an entire crop, so keep an eye out for orange spots on the leaves. If I wasn’t coming to the end of my leek harvest, I would remove all leaves with signs of leek rust and burn them.

Healthy leeks will be ready to harvest from late autumn, and most varieties are hardy enough to stand through the winter and be picked when needed.

The vegetable is wonderful in a soup – the classic leek and potato, or adding, finely chopped, to a chicken or lamb broth, as we did on Easter Monday to the leftovers from Sunday leg of lamb. But when they’re your own leeks, growing for the best part of a year, you will also want to put it centre stage in a dish that lets its flavour come to the fore, such as a tart.

Leeks and cheese go really well together. Creamier ones that melt well, like Taleggio or Brie, or a crumbly one like Cheshire, are best.

First make the pastry by dicing the chilled butter and mixing with the flour and salt until it is like sand. Add a small amount of water and combine until it is ready to roll, adding water to achieve the right texture. Wrap in cling film and put in the fridge for 20 minutes. Put the oven onto gas mark 4 / 180C. Once the pastry dough has chilled, remove from fridge and roll out and line a greased flan dish. Bake this blind – I use ceramic baking beads – for 20 minutes then set aside.

Chop the leeks into one cm thick slices and cook lightly with butter until they are softened – do not allow them to singe. Remove from the heat and mix in a bowl with the beaten egg, cream, cheese and salt and pepper.

Spoon the filling into the cooked base and bake for a further  35 minutes at gas mark 4 / 180C.

3 thoughts on “Star of the week: leeks”