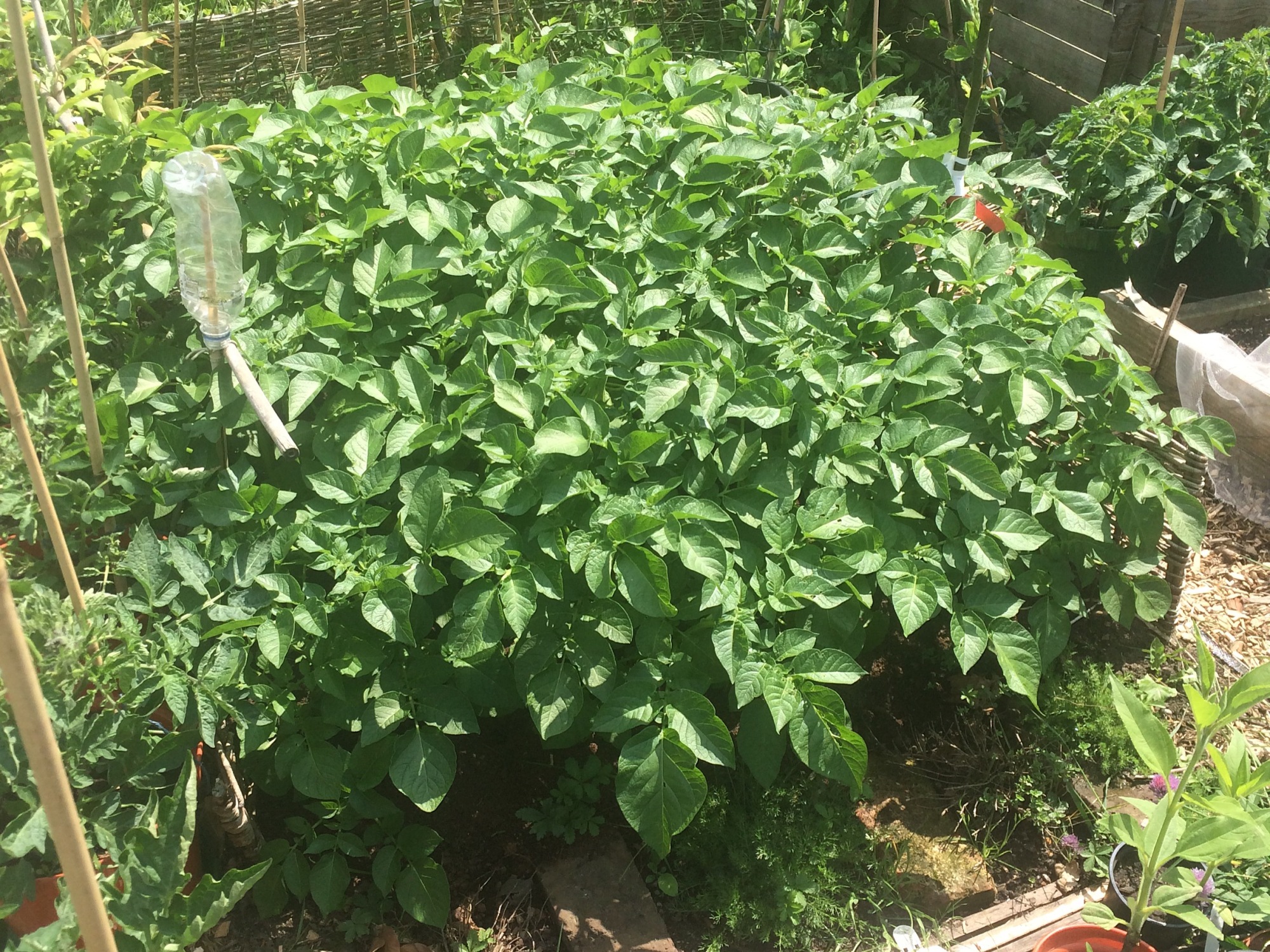 I’m a bit late with chitting potatoes this year – normally I start them off in January to let them grow shoots ahead of planting out in March, typically on St Patrick’s Day. It won’t matter that I am a month behind, as chitting is not strictly necessary – some people don’t chit at all but plant them straight into the ground. But I think that, given the seed potatoes normally arrive or are available to buy in January or February, several weeks before the ground is warm enough for planting, it is better to chit them anyway rather than leave them to sweat in the netting bag in which they are delivered.

The chitting process allows short shoots to grow to give them a good start when they are planted out later. Use egg boxes or empty seed module trays so they can stand upright – they need to have their “rose”, tiny nodules from where the shoots will grow, uppermost.

Choose somewhere cool and dry – a cool room at home, somewhere light but away from strong sunlight and central heating, is good. However, if you are like me and have a partner who has a low tolerance of gardening paraphernalia around the house (I can get away with a heated propagator for my chillies and tomatoes but little else), you could put them in a cold frame, as long as it is completely dry and frost-free, or greenhouse.

Do not do what I did last year and put them in a shed with no ventilation, as they will sweat and risk rotting (I rescued mine just in time). Another lesson I learnt last year is to write the initial of the variety on each seed potato so they can be identified if a storm blows through the plot, as happened with Storm Imogen in February 2016, just days after they were rescued from the shed and put in a flimsy and small wooden greenhouse. The storm blew over the greenhouse, scattering the potatoes everywhere, so that they were all mixed up.

By mid-March, the chitted potatoes should have grown short stumpy shoots. I plant mine out on St Patrick’s Day, March 17th, regardless of variety or whether they are early or maincrop. They will be planted in a drill 15cm deep, each potato 30cm apart. Choose a sunny spot to grow potatoes, obviously not in the same place as last year.

This year I am going for two old favourites and one new to my plot – a first early, a second early salad variety and a maincrop. Three varieties (with about 20 seed potatoes each) spread over the growing season is enough for my family and, in any case, I don’t have the room to grow any more.

The first early is ‘Casablanca’, which I have grown before and is very reliable, good for roasting with a floury texture. These will go in potato bags (see picture below) to save space.

The second early variety is ‘Charlotte’, a popular salad potato I grow every year, with yellow flesh and a waxy texture.

The maincrop variety is one I am trying for the first time, ‘Cara’, which is supposed to have good resistance to blight and is a heavy cropper. I have read that it has a very light texture, which will not withstand boiling, so perhaps is better suited to roasting.

Many people earth up their potato plants as they grow – drawing compost around the green shoots and leaves. Earthing up protects the plants from frost and stops the potatoes being exposed to sunlight, which turns them green and poisonous.

But it is not necessary to do this, and I get away with not earthing up – it uses a lot of compost, which is expensive, and in London we very rarely suffer from late frost. And once the potatoes are growing they are hidden by the thick, tall growth of the plants so the risk of turning green is lessened.

First earlies should be ready to harvest by mid to late June, second earlies in July, and maincrop from August, although they will also cope with staying in the ground into autumn.