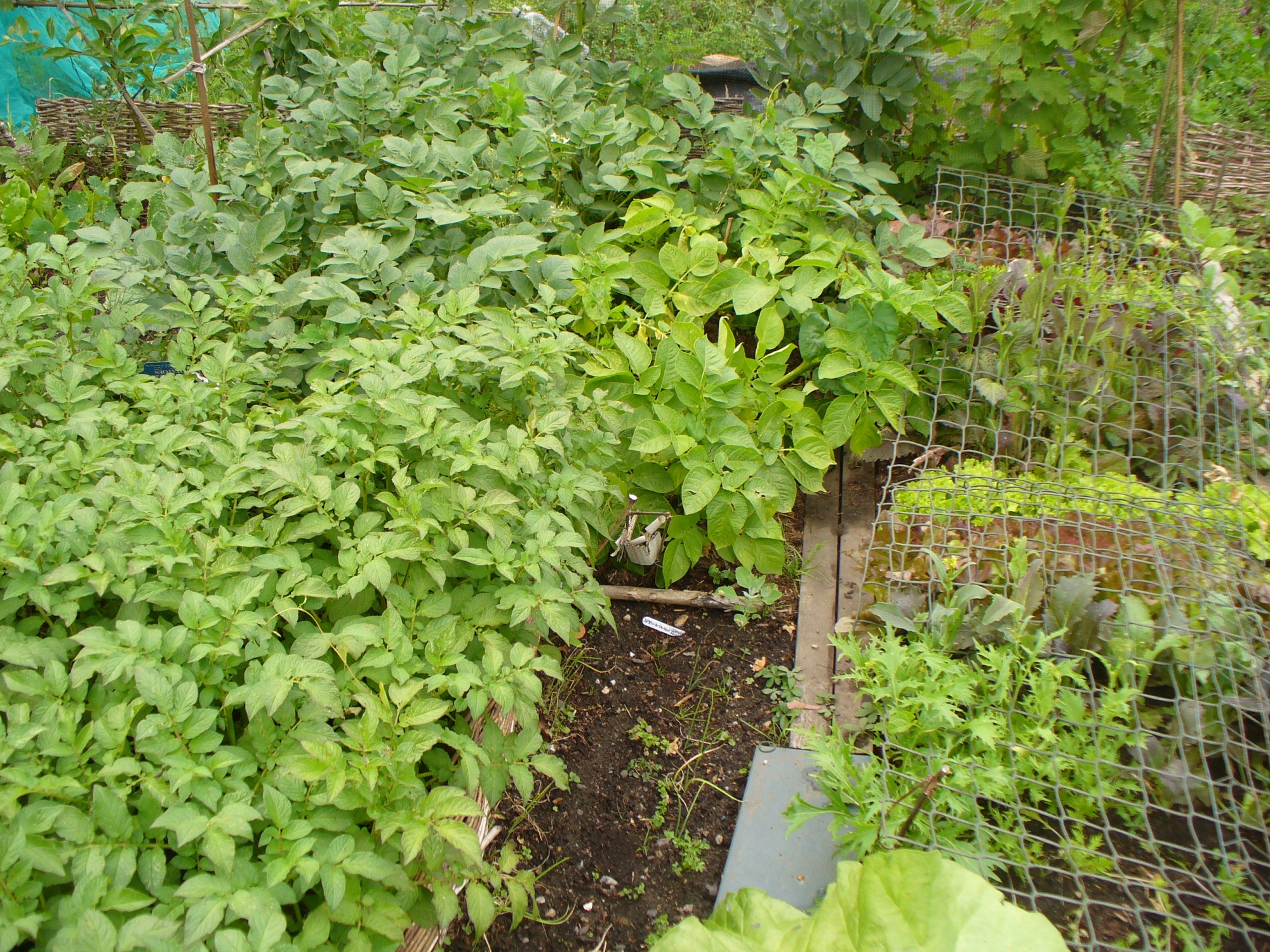 The story of my potato crop so far this year is not a happy one: first, the seed potatoes were banished from the house by Him Indoors in January before they could start chitting. So I took them to the playhouse at the allotment where they got too moist because of lack of ventilation and sweated overnight – a recipe for mould and rotting. Then, I moved them to the mini-greenhouse outside where they chitted happily for a few weeks until Storm Imogen – or was it Katie? – knocked the whole thing over and the seed potatoes spilt everywhere.

They were largely undamaged, but the four varieties had scattered so widely and mixed with each other that it took a long time to sort them out, and I am still not sure they are all back together in the right groups. Inca Bella and Picasso are both maincrop varieties and have some pink tinges, but so does Harlequin, a second early – although this potato has a more oval, elongated shape. Casablanca is a first early and is not tinged pink, so I hope I have recognised these. But I fear some of these are irretrievably jumbled up.

A few weeks after the mix-up, I was having Sunday lunch at my sister’s house. Helping her clear the plates after we’d eaten, I went into her kitchen and spotted rows of potatoes chitting on her kitchen windowsill. When I got closer, I noticed that letters were written on each seed potato in permanent black marker – there was a ‘Ch’ for Charlotte, a ‘Cb’ for Casablanca. This was brilliantly simple, and I cursed myself for not thinking of it too. At least I know what to do next year.

As I wrote back in February, I normally plant all of my potatoes, regardless of variety, on St Patrick’s Day, March 17th. Some people would be shocked that I go so early, because the soil is too cold. But I have always done this on my south London plot and the potatoes have been fine. However, this year my March timetable was set back by two weeks because of illness, which in a way was fortuitous as a wintry dampness hung over our allotment site well until the end of March.

Since then, I have been gradually catching up. I planted what I believe are the ‘Casablanca’ potatoes in open ground, in the bed where the celeriac had just finished. In a bed, each seed potato should be planted in trenches 5 inches deep, 12 inches apart for earlies and 15 inches apart for maincrop varieties. You can earth up the growing plants – this protects them from frost and stop the potatoes being exposed to sunlight. It is debatable whether this increases yield, however – I do not earth up after a few weeks and still harvest plenty of potatoes.

First earlies will be ready to harvest in June and July – roughly three months after planting, while second earlies will crop a month later. They will be ready once the plants have flowered. Maincrop varieties are ready later – from August. Wait until after flowering and the foliage has started to die back. They can be left in the ground through autumn to be lifted when needed.

As space is limited, I have put the other three varieties, ‘Harlequin’, ‘Inca Bella’ and ‘Picasso’, into a number of potato bags with plenty of drainage holes and a velcro-sealed flap towards the bottom for harvesting. You can reuse compost bags for growing potatoes, but be aware that the plastic will make the potatoes be more susceptible to rotting, even with plenty of drainage holes. A specialist potato bag, made from breathable, woven material, is better.

Using a standard potato bag that’s about 18 inches high, fill a third with compost and bury six seed potatoes just below the surface, and cover with about another inch of compost. As the plants grow, keep adding compost until you have reached the top.

As with most things, slugs are a problem – keep them at bay using whatever you can, because there is nothing more maddening than your bountiful potato crop being attacked before it’s even got going. Potato blight is more serious and harder to tackle. There are blight-resistant varieties, including the Sarpo group. Otherwise, keep an eye out for the warning signs: a sudden browning of leaves after heavy rain and in humid conditions (potato leaves might go brown due to drought, so it’s important to compare the weather with symptoms) is a key sign. Lift plants and tubers and burn them or throw them in the ordinary waste bin – not on the compost heap.