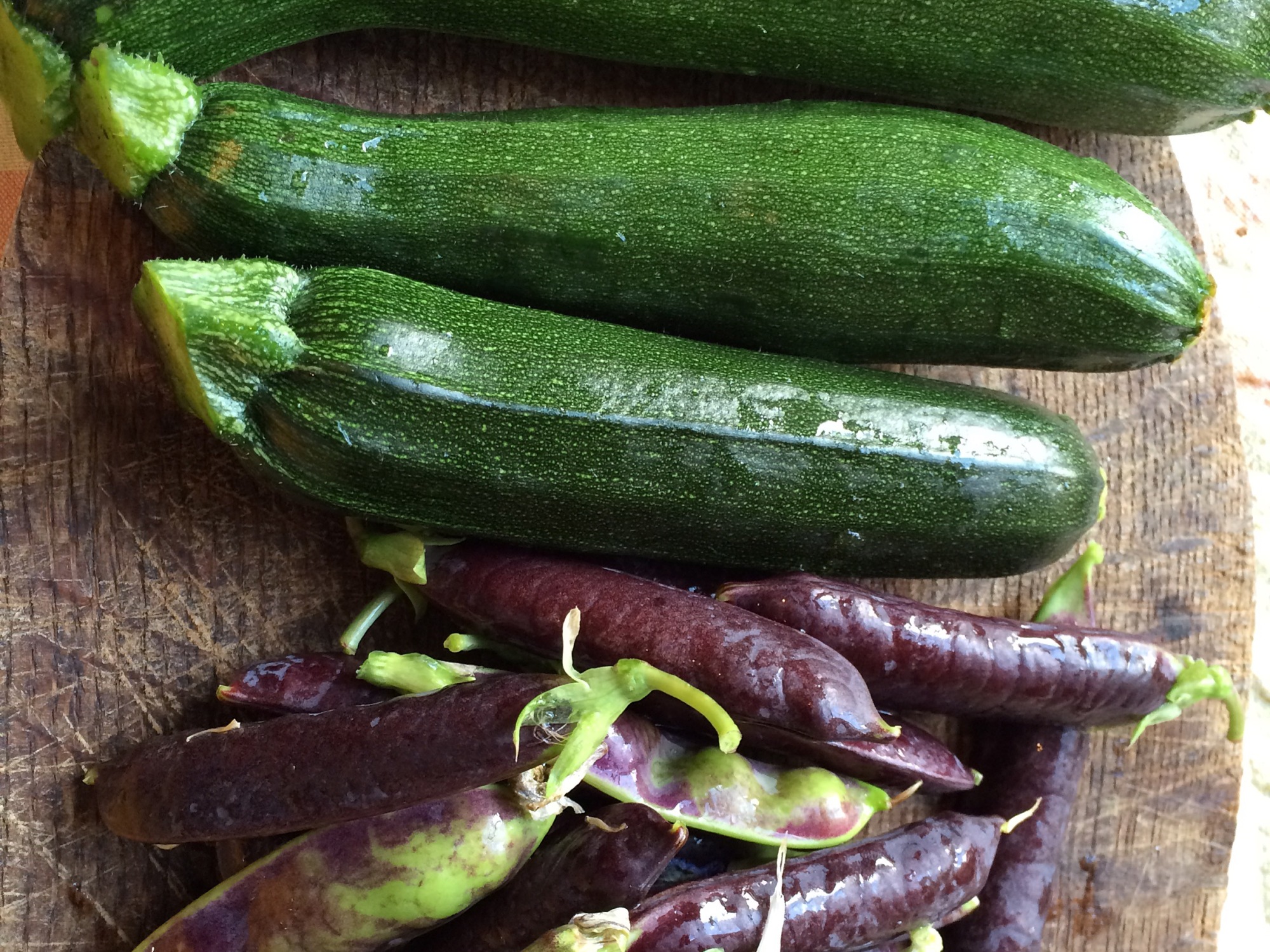 There is the first day of spring according to weather forecasters, who go by March 1st. And there is the first official day of spring, after the equinox on March 21st. Then there is the moment when everything in the garden comes to life, and this is the moment that really counts. Not just the first shoots of rhubarb or the blossom buds on the fruit trees, but a sweeping greenness and colour on everything:  vivid red and orange tulips, gigantic rhubarb leaves that swamp the paths, hedgerows that are grey and bare one day and flecked with green the next. This moment, this sign of the unstoppable surge of life, happened on my plot last week after a string of warm sunny days.

It is still April, though, and today although the temperature reads 13C the wind bites when the sun goes behind the clouds. It is tempting to put outside the tomatoes and chillies that are six inches high and have been robust in their cold frame, to let them know what real sun feels like, but it would be a mistake – last night it was 2C in London, and much colder in the countryside.

If you haven’t sown tender veg yet, there is not long to go. I met a stallholder at Borough Market the other week who told me he sows tomato seeds direct into the soil in late April and always gets a bumper crop. I have never tried this, because I would be worried about snails, birds and foxes getting to them first. I prefer to get my tender crops started off in a heated propagator and gradually pot on into cooler environments until they go outdoors in May.

If, like me, you don’t have a large polytunnel or greenhouse to grow your chillies, it is too late to start them off by seed for growing outside – we don’t have a summer long enough for them to grow, set flowers and develop deep red fruit. I would say the same for tomatoes, although you can try your luck and get some started off now, and it might be ok.

But it is not too late to sow cucumbers, courgettes, aubergines, cape gooseberries and okra, and at the weekend I started all of these off in a propagator. I’m not counting sweetcorn, pumpkins, French beans and runner beans as I sow these into modules in a cold frame in May. All of these tender veg need loving care to get them to crop: either in pots in a warm spot or under the cover of a cold frame or mini-greenhouse.

Courgette seeds are brilliant at germinating, and if you don’t have a heated propagator a sunny windowsill will do. The seeds are large, so they don’t get washed away when you clumsily try to wield your indoor watering can over the pots. They germinate quite quickly, within four to five days, and go from the seed leaf stage, with two large oval leaves, to true leaf, the third with the serrated edge, just as fast. This means you shouldn’t sow courgettes too early unless you have plenty of room undercover to keep potting them on into larger pots as the weeks go by. They shouldn’t be planted out until after the last frost: I do mine in early May.

This year I am growing six varieties – one of each, because I only have room for six of these spreading plants on my plot. ‘Alfresco’ is an F1 (non-heritage) variety which produces pale green and sweet courgettes. ‘Tuscany’ is also F1, vigorous and with a dark green fruit. ‘Easy Pick Gold’ F1 is a yellow, high-cropping courgette. I have also chosen three striped, gently ridged varieties which look amazing when grilled or made into courgetti: ‘Romanesco’, ‘Striato di Napoli’ and ‘Striato d’Italia’. With all of these plants I will pick the courgettes small, when they have better flavour and are firmer for using raw in salads or as courgetti. Gluts of courgettes are common, but keeping them small and ticking over all summer will mean they are all eaten within hours of harvest. The first courgettes will arrive in late June and keep going until September.

Last year I bought grafted watermelon plants which did not grow well – possibly because of poor pollination – they need some help from a paintbrush. I am trying to grow watermelon from seed for the first time, and have chosen ‘Red Star’, an F1 variety which can be grown outside as long as it’s in a sheltered, warm spot. I am growing cape gooseberry, or physalis, also for the first time. These tiny seeds need warmth of around 22C to germinate, and then are potted on indoors once they grow leaves before hardening off outside, again to a warm spot or in a greenhouse.

I have never successfully grown okra before – I tried a few years ago and the plants got too cold outdoors. In my tender veg sowing batch I started off ‘Cajun Delight’ and ‘Pure Luck’, a variety whose name gives me a wry smile because it is touch and go whether I will produce actual okra for eating later this summer. These plants will definitely stay undercover in a mini-greenhouse.

Next in my heated propagator I sowed five varieties of cucumber – one indoor variety, the male flowers of which must be removed or else the fruit will taste bitter, and four that are suitable for growing outdoors, where both male and female flowers are kept. I will grow ‘Telegraph Improved’, a smooth-skinned indoor variety, in a mini-greenhouse.

The four varieties for outdoors, which will grow in an open bed (I find grow-bags do not provide enough room) are: ‘Emilie’ F1, a smooth-skinned slicing cucumber, ‘Marketmore 76’, which has slightly bumpy skin, ‘Cornichon de Paris’, a pickling gherkin variety, and ‘Bianco Lungo’, a white heritage cucumber which I am growing for the first time and am pretty excited about. Once they are in their final growing position, pinch out the growing tip after they have produced seven leaves – this will focus the plant’s energy on producing flowers and fruit. Pinch out any side shoots that do not produce flowers.

Similarly, aubergines can be grown outdoors as long as they have some protection, but do better if undercover. The varieties I have sown are ‘Moneymaker No2’ F1, which has medium-sized black skinned fruits, ‘Black Beauty’, a slightly larger variety, ‘Striped Toga’, which at three inches long and striped green and orange looks more like an exotic tomato than an aubergine, and ‘Tonda Bianca Sfumata di Rosa’, closer to the original ‘eggplant’ colour of white as it grows, but ripens to a lilac hue.

Once the plant has flowered and has started to grow around six fruit, pinch out the top to stop it becoming too tall and to help the plant concentrate its energy on swelling the crop.