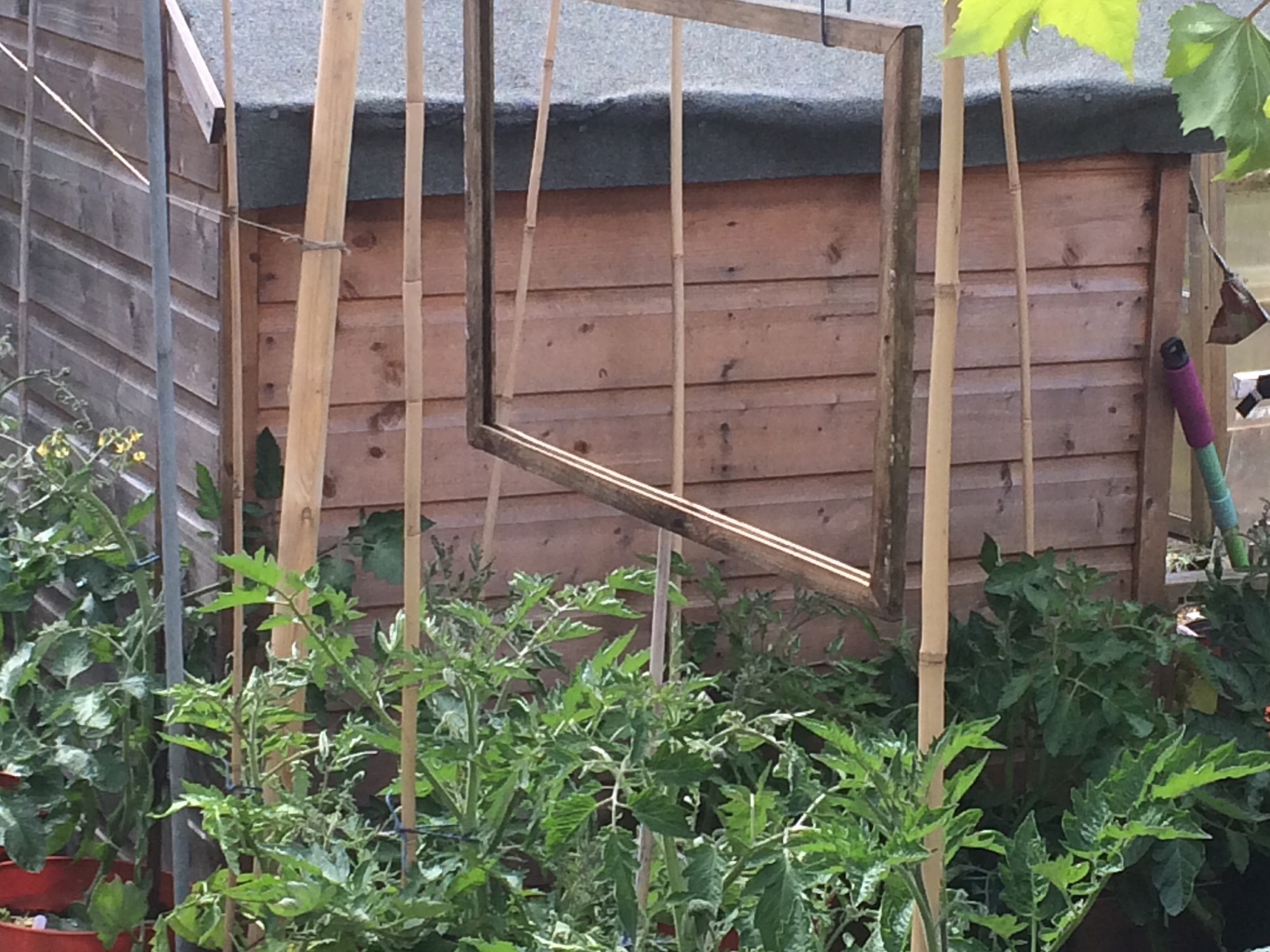 What is a tomato window, I hear you ask? Well, since the demise of the grapevine earlier this month, I had been looking for something to fill the space between the seating area and the side path. I needed plants that wouldn’t take up much space on the ground but can be trained vertically into a screen. Runner or climbing French beans would be perfect here – but they are already in another bed, so maybe next year. Because I have so many tomatoes growing in pots on every little path of my maze-like plot, and they are getting a little bit crowded, I decided to move some of them to the newly opened-up space.

After planting them out into large pots last month, all the tomatoes are growing well. I have been removing side-shoots – they are usually those which have no buds or flowers, growing out underneath a shoot bearing buds or flowers – to encourage the tomatoes to grow upwards as cordons. Now that some are showing little yellow flowers I will feed them with an organic tomato food – seaweed-based Maxicrop or my own homemade comfrey tea. Several tomato cordons in a line will, hopefully, make a lush and colourful screen.

The idea for a tomato “window” came as I was clearing the seating area, which was cluttered with old wood and pots. In among the longing-to-be-recycled junk was an old wooden picture frame, without painting and glass, that I was going to use as the edge of a lid of a new home-made cold frame. Picturing my “wall” of tomato plants, I had the idea of the frame being used as a window to my plot.

To make this wall sturdy, I pushed two thick, 2.1m canes into the earth at each end of the line of tomato plants. Next, I tied another long cane vertically between the two canes, so that the three came to look like a makeshift football goal (albeit with tomato pots along the goal-line). I then tied the old picture frame to the top vertical cane and let it swing below it to form a “window”, as I hope you can see from the picture above.

Each day brings a bigger harvest. The broad beans keep coming – I’ve had about five pickings of them, and they will be good for a couple of weeks yet. But we are also reaching what all allotmenteers must recognise – a sort of botanical bed-blocking, with seedlings waiting in a nursery bed or in modules for another crop to finish. In the bed where the broad beans are still going strong I plan to put my leeks, which are still in root-trainers.

This month, fruit like apples, pears, plums and apricots will need thinning if there is overcrowding on branches. Wait until the “June Drop” – when apples, in particular, shed small, weaker fruit naturally as a way to conserve energy for their prize specimens. I have several apple trees growing as step-overs or espaliers with some over-crowding, and a couple of trees are bearing very small fruit. If they survive the June Drop, I will snip them out at the end of the month. It is tough love removing healthy fruit, particularly when there are three good apples as shown in the picture above. But tell yourself you are sacrificing one to help the other two grow even bigger and better.

It is also a good week to tie in cucumbers, both indoor and outdoor varieties, as all this humidity will be making them shoot upwards. If you are growing them up a cane, tie string or soft twine to the main stem at intervals using a figure of eight to put as little pressure on the stem as possible.

This cucumber tendril, which is on a plant growing outdoors, has nothing to grow up and curled in on itself.

Melons grown outdoors (if you are lucky enough to have a warm sheltered spot to grow them or live in a hotter country than the UK) should have few problems with pollination, but those grown undercover – like half of mine – might need some assistance. Leave the windows or doors of polytunnels or greenhouses open on sunny days to invite the pollinators in. Check behind the yellow flowers for signs of fruit: in the picture above you can see this melon ‘Melba’ has a tiny fruit growing behind the flower.

If you haven’t already done so, place netting over soft fruit like strawberries, raspberries, redcurrants and gooseberries to stop birds and squirrels stealing your precious fruit. I have found squirrels have tried to tear the netting over my strawberries (they have also been ripping into broad bean pods). But the raspberries, which are usually raided by birds and squirrels, have been left for me to help myself – before I had a chance to net them. So I might just leave the raspberries uncovered.

The soft fruit is taking over from the rhubarb, which has kept us in desserts for the past three months. I will stop picking rhubarb stems on the last day of June, to give the crowns a rest and a chance to store up more energy for next season’s growth.