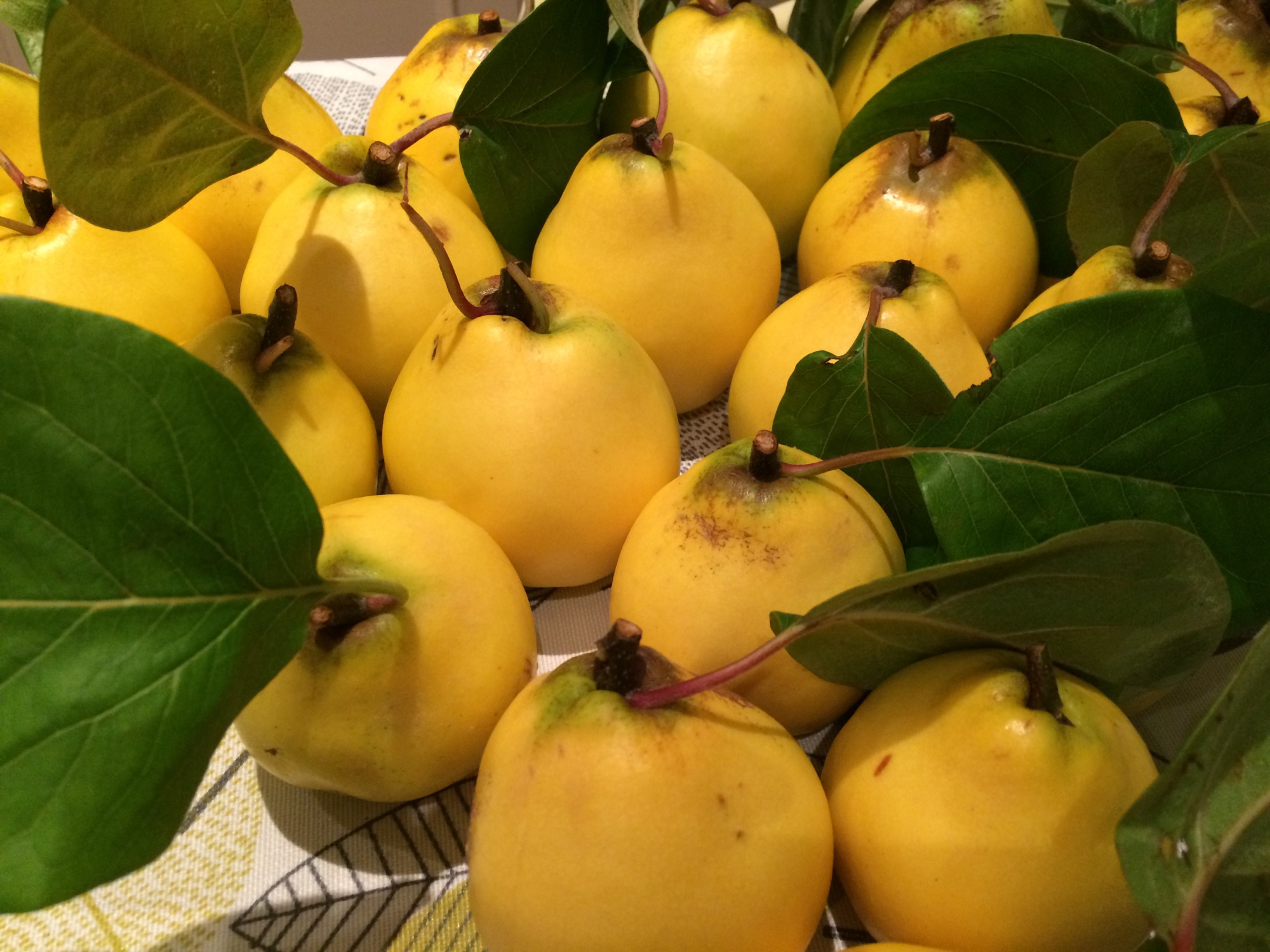 On the route to my daughter’s school we pass a giant quince tree that has almost overgrown its London front garden. Every April and early May it is dressed in beautiful pink blossom, each flower like a delicate teacup perching on the tip of its branch. By late September, the blossom has turned to bright yellow quinces that look so heavy I am always amazed they don’t tumble to our feet as my six-year-old scoots past. The tree is owned by an elderly lady who struggles to harvest them. I know this because, this time last year, a fellow mother at the school knocked on her door to ask if she needed help to pick them, as they seemed perfectly ripe. The lady told her visitor she could help herself, and so she did. A few weeks later this mother returned with a jar of quince jelly made from the fruit she owned.

I love this story because it sums up what I feel about the quince – the true Cydonia oblonga, rather than the Japanese flowering type. It is a magnificent, often sprawling tree that produces fruit that is both revered but also treated with some trepidation. Quinces cannot be plucked from the branch and eaten fresh like an apple, as their texture is grainy, almost like cork. Once harvested and brought into the house, they give off a robust floral scent but need to be cooked well – commonly with lamb in a tagine – to be properly enjoyed. But the thing I love most about growing quinces is making quivering, amber jelly, and now is the time to do this.

I planted my quince the first winter on my plot, nearly three years ago. In that time it has grown into a substantial tree that produces around 60 fruit, outstripping any apple I’ve grown in that time. It needs very little attention – a light pruning of wayward branches in the winter, and the normal dressing of rotted manure at the start of the growing season.

This spring, as the open-flowered blossom was at its peak, I sat under the tree to pot on my tomato plants. Now the tomato plants are finished, and are being removed from their pots and composted, the quinces are yellow and ready to pick – having shed most of their downy bloom.

Some have developed brown patches and have split – the dry weather followed by heavy rain is probably to blame. This year about 40 have made it through to unblemished ripeness and are ready for the pan. To make the jelly, remove the stalks but there is no need to peel or remove the core – the skin adds to the colour and there is plenty of pectin in both to help it set. In any case, the quinces are too hard to peel easily. Chop them into chunky pieces and place in a pan, covering the fruit with just enough water so the pieces are bobbing under the surface. Bring the mixture to a vigorous simmer then turn down slightly and continue to simmer until it has reduced to a pulp. As the fruit is pretty tough, it could take up to an hour. You might need to mash it further to get it into a looser pulp to drip through your jelly bag.

Strain the mixture through the jelly bag, or a muslin tied with string, over a bowl for 10 hours or overnight. At this point, the pulp is still yellow – the rich amber colour comes when it is cooked with sugar. After it has been strained, you should have a thick yellow liquid. Prepare jam jars by sterilising them – I wash mine in hot soapy water, rinse but not dry them and place the jars and lids in an oven at 120C until they are completely dry. Place a saucer in the freezer for testing the setting point later.

Measure the liquid in a jug: for every 600ml of liquid you will need 500g of white granulated sugar – you could use jam sugar but as quinces contain a decent amount of pectin, it’s probably not necessary. Add the liquid and sugar to a pan and simmer until the sugar has dissolved, then bring to the boil and leave it there for about 10 minutes – when it has started to pop volcanically, it is ready to be tested. By now, the mixture will have turned from opaque yellow to translucent amber.

To test whether the setting point has been reached, turn off the heat and take the saucer out of the freezer, drop a teaspoon of jelly onto the saucer and return it to the freezer for three minutes. If a skin has formed – it should wrinkle when you push it with your finger – then a set has been achieved. If not, you need to return the pan to the heat and keep boiling and testing.

When you’re happy with your set, pour the hot liquid into jam jars, preferably with a funnel, screw on the lids and leave to cool. I adore quince jelly with an oozing taleggio or salty pecorino cheese.

5 thoughts on “A quince among leaves”