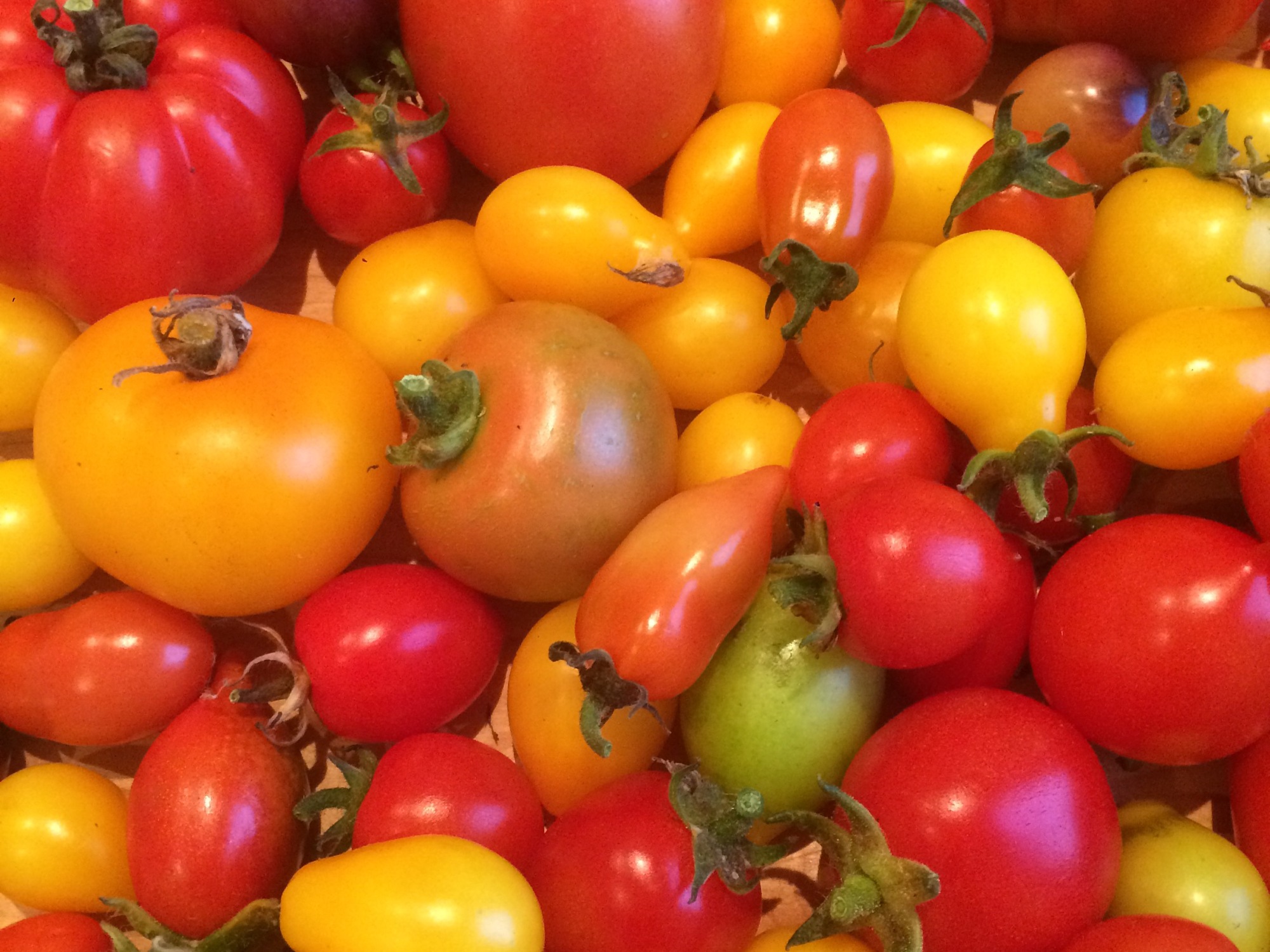 Apologies for the terrible pun in the title. I also had “The Endive Days”, so it could have been much worse. But we are now entering what they call in Yorkshire the “back end” of the season. Of course, there’s a whole autumn ahead of harvesting apples, pears, quinces, grapes, leeks, purple sprouting broccoli. But most of the vegetables sown in spring require picking now, or else they will blow out and spoil.

So the weed-free lush greenness and order of the plot before I went on holiday at the end of July has been replaced by an urgent harvest-and-water-everything-you-can remedial work since I came back two weeks ago. It has not helped that we have had hardly any rain for the whole of August. I was too relaxed about rainfall when I went away for three weeks without telling any of my neighbours to keep an eye on the watering. The last few Augusts have been rainy, so I thought it would be ok. But not this year.

Plot 35a is now so dry, the tomatoes have all decided to ripen at once (they do this when faced with drought), the courgettes in pots gave up their last yields before finishing completely, and the beetroots are looking small because of a lack of water. I try not to look at the sweet peas, a tangle of seed cases and faded flowers, or the weeds, which don’t seem to care about drought, springing up amongst the leeks. Instead I pick everything that’s ready until my basket is full and the bag for life can’t hold anymore.

This is what I picked on my first day back. The apples are a mix of ‘Early Victoria’, a cooking apple that fluffs up like proper apple pie filling should when cooked with sugar, and ‘Tom Putt’, a cider apple that can also be cooked. There are two smooth ‘Telegraph Improved’ indoor cucumbers, which grew fantastically well in the little wooden greenhouse despite no water. Some courgettes, including the stripy ‘Striato d’Italia’, which are just this side of becoming marrows. Lots of runner beans, which are still going strong, and the last of the purple podded peas.

Tomatoes including ‘Marmande’, ‘Yellow Pear’, ‘Red Pear’, ‘Golden Sunrise’, and the tomato known only as ‘C’ from Rob Smith’s trial. I would love to know the name of this variety, as it grew well, with a uniform shape. The potatoes are ‘Picasso’, with splodges of pink on yellow skin. The fruit includes yellow autumn raspberries ‘All Gold’, blueberries and, for the first time, damsons. Discovering them, ripe and untouched by wasps, as I scrambled my way through overgrown grapevine and blackberry bushes, was such an end-of-holiday joy. The variety is ‘Merryweather’. There are only 12, not enough to make jam, but I could mix them with apples and make them into a crumble. For now, they are in the freezer until I can decide what to do.

Back in July I sowed some chicory and its variants: endive, escarole and radicchio. I also planted some puntarelle grown from seed by my fellow plotholder, Maurizio. This bed is where my spring-sown lettuce had just finished, and as it is in semi-shade it has continued to be a perfect spot for leaves. There was no problem with lack of water, because this bed doesn’t get the scorch of the afternoon sun. What’s more, the slugs have been nowhere near because it has been so dry.

The puntarelle is from the same family as the dandelion – meaning on a few occasions I have had to resist weeding it out of the bed. The difference is that puntarelle costs a lot of money when bought from farmers markets or trendy London delis. It needs to form whitish green bulbs before harvesting, then it is blanched and typically cooked “alla romagna” with an anchovy vinaigrette. For a full recipe, courtesy of Maurizio, see my piece in the Dulwich Diverter.

Like puntarelle, escarole needs to heart up before picking and also needs a bit of gentle blanching to taste good. Sow it after the longest day, or else the lengthening days will make it bolt, until September. The more familiar endive can be sown from late June to September – I have ‘White Curled’ and ‘Glory’. The chicory and radicchio can be sown at similar times and also need to bulk up to get their true value. I am growing radicchio ‘Rossa di Treviso Svelta’ which grows into a cylindrical, maroon and white plant. Most seed companies sell these varieties but I bought mine from Seeds of Italy.

All of these sturdy leaves are perfect for autumn and winter growing. They will be killed off by a hard frost, so consider covering in fleece or a plastic cloche if your plot is prone. I have grown radicchio through mild winters in south London, the striking maroon leaves standing out against the bare soil, but last winter we had severe frost and it turned into a messy brown pulp. It is not too late to also sow pak choi, tatsoi and other Japanese leaves to add to this autumn feast of leaves. These will also need protection as it gets colder. As I was saying, it is the endive days.